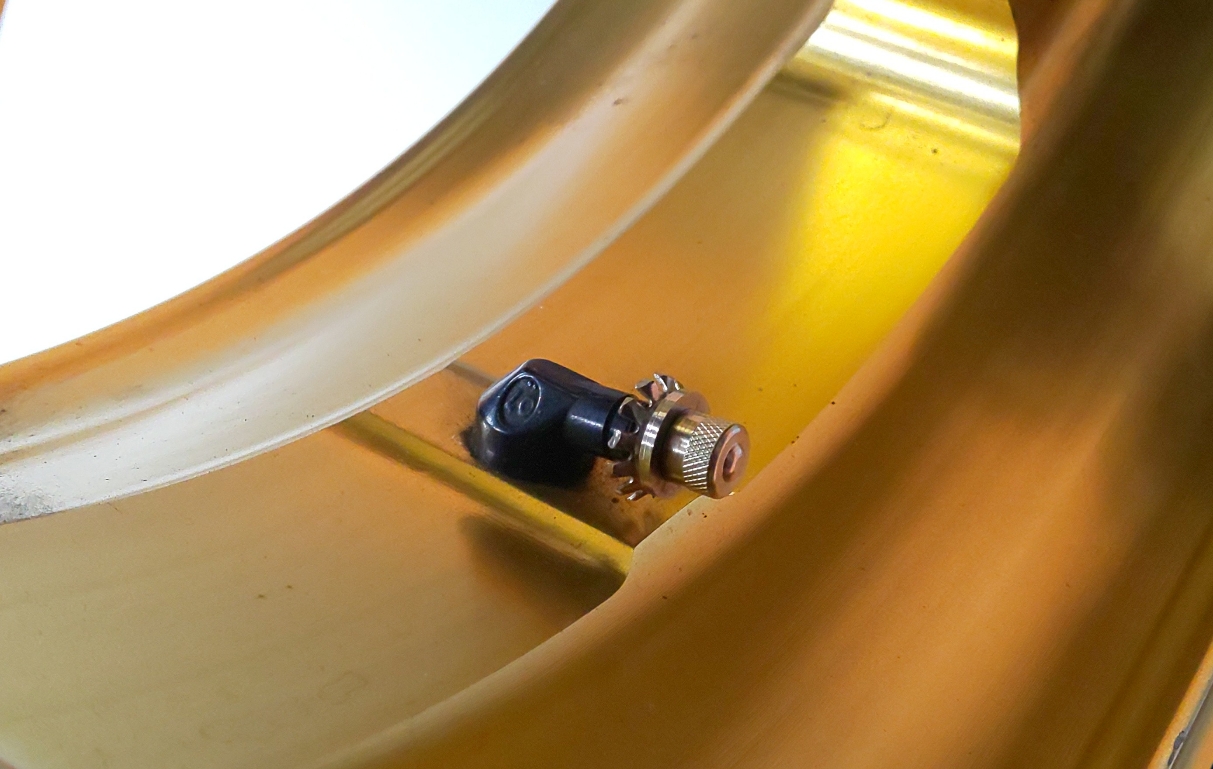 The following three types of valves are normally used.

Since it is common throughout the world, there is no difference between domestic and foreign cars.


read important information prior to ordering. 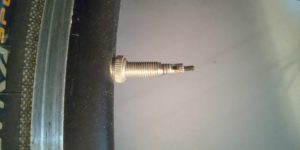 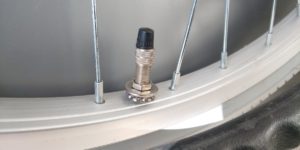 The effect
＊Improves tire rolling.
Some large motorcycles that can be felt by just pushing and pulling.

＊Straightness is improved and stable handling is achieved.
Small diameter tires and older tire are easy to feel.

＊makes it easier to feel the tire grips.

＊The running (tire)noise will be quieter.
The car is easy to feel.

Caution (to avoid injury must read this section)

The edge of the washer is sharp, so be sure to wear leather or equivalent gloves when working. Work gloves and thin rubber gloves can cause injury. If you get caught and hardened while screw turning, be careful as you will be cut your fingertips if you try to forcefully tighten the washer by grasping it. Valves with tubes that have long exposed threads, have dust and dirt on the threads even if they look clean first glance.

It gets caught in the middle of turning the discharge nut and becomes hard, and if you try to forcefully tighten it by grasping the entire discharge nut, it may be possible to cut your fingertips! Be sure to use gloves such as leather.

In particular, the English bicycle valve is easy to gets foreign matter, so if it is too hard to fit in, remove it and clean the screw.

If it still does not goes, loosen the rim nut and return it to the tip to remove dust. 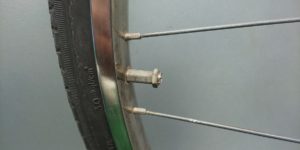 No rebalancing is required on wheels (even motorcycles). Screw the jagged washer toward the wheel. (If you fix it toward the cap, air will not enter) you may injure your fingertips each time you turn the cap. It is best to insert the washer all the way in, tighten the cap, then return the nut and lightly lock it with the cap. 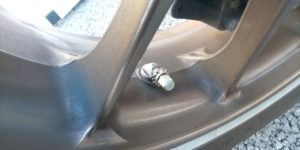 If the threaded part is long and the gap under the cap is large, such as a valve with a rim nut (tube type), do not force it back to the cap side, but move to contact with the rim nut and tighten it lightly. IThe welding may damage and come off. If tightened with pliers.

type of short valve that is often used in scooters and the cap are in close contact with each other, the outer circumference of the valve tip does not reach the rubber packing inside the valve cap (when the discharge nut is attached.)

The rubber packing inside the cap also has the effect of preventing the cap from loosening, so it is recommended to replace the short external valve cap. If there is a gap of 2 mm or more between the valve cap and the base of the valve, there is no problem with the original function of the cap.

If there is no gap, (it is not absolutely useless), it is not the correct way to handle it as a valve cap.

There is no gap between the cap and the valve 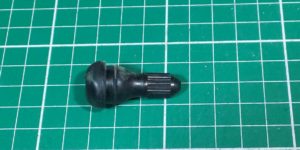 Available the shortest cap. (price @ 100 JPY w/o tax.) This cap is hard to sell, so if you are using a normal plastic cap, we recommend this short cap. If you wish to have this, please tell us when ordering. 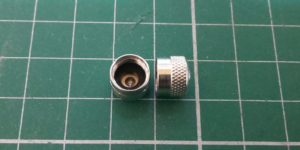 The gap created between the discharge nut and the cap

Return the nut to the cap side and bring it into contact. 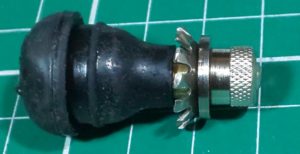 If the outer circumference of the washer is almost to touch the wheel(with a sideways valve), for example, genuine valve cap of the front wheel of Honda VFR800, when you tighten the cap and then return the discharge nut and lock it, it did not interfar the wheel, but it is even safer to use a short valve cap.(sold separately). There are many vehicles that are used without the valve cap, but if dust is caught in , the air may leak. Be sure to attach the cap to prevent the discharge nut from falling off.

If you remove the top nut of this valve, the air will leak, so you need to refill the air after installing it. Remove the top nut and valve  and screw the washer toward the wheel side. Please note that the flat part has no threads, so the nut may enter diagonally. Turn the washer all the way toward the foil to bring it into contact with the rim nut, and then lightly tighten it by hand. 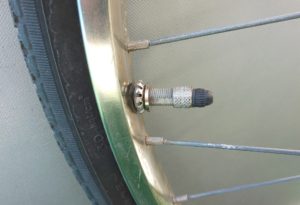 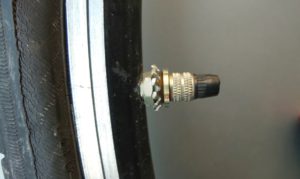 Turn the washer all the way toward the rim to contact the rim nut, and then lightly tighten it by hand. 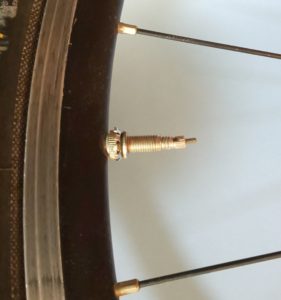 ＊The long type Presta(French) valve cannot be installed (because the outer circumference is not threaded).

Few years ago, some iron wheel user asked about this,”Do you know how great it is, to attach it to a valve!” I said “ I know and I don’t sell it, but I have it on my own.  Frends said “Why not make and sell it ?” It is a problem if it falls off just by pinching it without using a nut, and the stainless steel of this nut is almost nonexistent. And even if it is, the thickness is at least 2.5 to 3 mm. Thickness = weight increase, cap gap problem, cost, manufacturing difficulty … To be honest, I left it alone. And later another day “Haven’t you released it yet?” I received an inquiry, and although it was thin and very troublesome to process, I put a tap on a washer with a thickness of 1.5 mm and cut the screw. Of course, there was no washer that was perfect for me, so I made one. It was possible to prevent it from falling off, and the weight was reduced to 1.6g, and the effect was improved more than just sandwiching the washer by surely energizing the screw part. Which is the best to say that the effect will be added regardless of the order of construction for “air goo” and “two-way coat” for tires that we intoroduce, and our own discharge nuts? It’s not that everyone is doing different jobs.The tires are so harsh. The discharge effect is permanent! Can be replaced by other vehicles ! Once you buy it, it’s a lifetime thing! Even if it is an electric car, there are tires! For all tires!

Thank you for your cooperation in the demonstration experiment at the time of release on these Dealers. Please contact them,

Vibration is reduced, so there is no numbness in the steering wheel or hands.

Lighter and easier to ride as rolling resistance is reduced.

Light even when walking across a vehicle.

I don’t care about road seams when changing lanes. 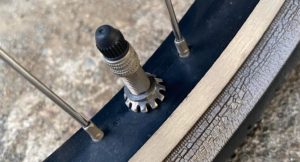 ＊Mamachari(standard cycle) who regularly carries water with a couple of Load 6.5L of water and over the zigzag slope of the pedestrian bridge across the four-lane road. I gave up rowing on the way and pushed down the bicycle, but I climbed up.

If you need 10 of your usual power, use maybe 8th now. When I tried to go home, I was able to climb!

I’m tired on my way home, so I haven’t climbed on a pedestrian bridge until now, but this is my first time! I told my wife to climb on the pedestrian bridge on the way home, and when I heard the impression “ I had climbed up, it was easy”. Easy means that you can pedal lightly. Of course I attached the nut without telling my wife.

When my wife goes shopping by bicycle, she feels as if she is riding an electric bicycle, running farther in a row than before.

I attached it to my daughter’s bicycle in high school without saying anything, and asked her what she thought later.

I didn’t think it was that much different.

Since there was a school today, I instructed her to be aware of the brakes and ride.

The answer was, “Sure, it’s easier to stop.”

After all, I think that it is also effective for braking.

Stopping the brakes with frictional force means that there is a high possibility that static electricity is being generated there.

The conclusion is that it also works for braking.

I will report the test drive result.

No change in speed.

I immediately put it on and used it for reeds up to the supermarket.

It’s light. I ride the headlight on at night, but it is as light as no generator is working.

It is a chari (Japanese slang for bicycle) a wife-only bicycle. There is a park in front of my house, which is a cobblestone walkway. So I tried it myself before and after installation.

After installation, I felt that the ride quality was considerably improved, with almost no discomfort even though it was the same ruggedness.

It seems that the bride also got on board and immediately understood, “This also sticks to the road surface, it is fun to row and I want to row more even though I arrived at the destination”, he seems to like it very much.

I attached the static elimination nut to the road bike and ran about 600 km. Since the power meter is not attached, the change in the power value is unknown. There are big changes due to the climate and wind direction depending on the day, and it is not possible to clearly compare the driving average.

However, the average value of cadence has increased, probably because the stirring resistance of the wheel has decreased. When traveling 100 km, a cadence increase of about 10 is allowed.   We will report it again.

To the customers who are coming to the workwear shop near us.

He refused once but he came back again.

He tried it today and had a test drive.

He said he had been suffering from buttocks pain for a couple of years. He changed the seat but never solved. The bicycle shop told me to give up.

He was on a bad road on purpose today, but it didn’t hurt him at all! YES, it was really good!

At first you might think you were a stranger person

The thickness and pitch of the thread are different, but if you overdo it, either one will be attached, but the outer diameter of the nut part is changed. 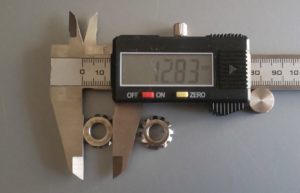 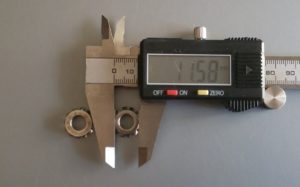